The BBC today published a story that discusses the support of the Russian government for a World War 2 movie based on a "Communist myth". The movie, Panfilov's 28 Men, tells the story of 28 Red Army soldiers outnumbered by invading German soldiers but fighting on heroically before they are all killed.The BBC article goes as far as calling the movie 'Communist mythology' as well as saying that it "echoes a Russian foreign policy concept: a Moscow-centred "Russian World" united by a common language."The truth is that this story is indeed made up. It is a propaganda tool to boost morale and a sense of national pride. Various state-funded and independent sources confirm this. Basically, no one is denying that the story has been made up but the tone of the BBC story and the ongoing anti-Russian rhetoric (aka look at the horrible thing Russia has done) has me wondering how much of it all is actually a genuine crusade for truth and how much is purely political. If we take Hollywood, the significantly larger US counterpart of the Russian film industry, and assess some of the inaccuracies it has sold as 'based on a true story', we might be here from a long time. White Jesus, White Cleopatra, Braveheart, primitive Africans and '300 Spartans' are just the tip of the iceberg. But I don't recall as much fuss and outrage being made out of the errors in these narratives. Also, most Hollywood war movies are embellished to the hills. Don't think I've seen many articles on mainstream media talking about links to foreign policy. 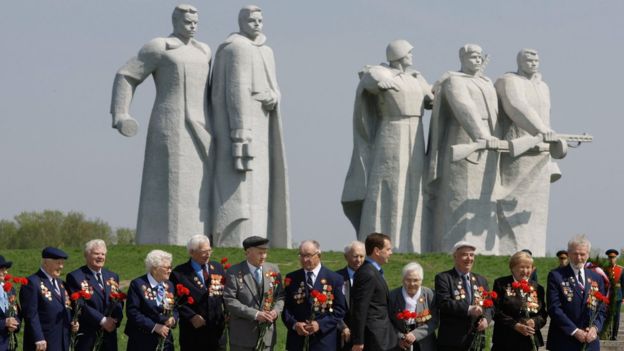 I am not condoning the falsification of history for any reason. My issue is with the readiness of some Western media to criticise something that happens so frequently within its own community. This attitude is not limited to movies either. You can see it in politics as well where some sections of the media, with the ink barely dry from their excuses for Western governments' meddling in conflicts across the world, writing scathing damnations of Russia's involvement in Syria. Don't get me wrong, what is going on in Syria is deplorable, inexcusable and needs to stop but it seems the same level of criticism is hardly ever directed at Western leaders and governments when they are at least equally guilty of the same crimes. The saying "take out the log in your eye before pointing out the speck in someone else's" comes to mind. Back to the hypocrisy around Panfilov's 28 Men, it seems like the right to make fictional movies is only reserved for Hollywood. Or maybe I missed the memo on Hollywood’s immunity from the fundamental need to represent history accurately. When you consider that barely anyone outside of the Russian-speaking world will see this film, it is even more eyebrow-raising that the film is being critiqued as it has been.

I doubt that the movie will be marked as ‘based on a true story’ but even if it is, what happens as a direct consequence will not even come close to what we have seen as a result of the Hollywood inaccuracies listed above. Either way, if Hollywood is allowed to embellish, why can't the Russians?
at October 11, 2016