I was on the Southbank in London very recently where I was offended to see a display by a well-known global charity encouraging passers-by to 'Step into Africa', with arrows pointing to some ramshackle huts. There were also some “African drums” on display. Like Africa's only contribution to the world were mud huts and drums.

I couldn't bring myself do more than glance into the huts as I walked past and I have no doubt that the charity had all the right intentions to help but this representation of African architecture and the African story in general needs to stop. It is time for a more balanced telling of the African story and this is my contribution to that process.

I have put together a list of five man made structures from different parts of Africa that I don't think many people would have heard of. All of these edifices where constructed before European colonisation and are, in my opinion, are some of the world's greatest wonders.

Benin Moat (or The Walls of Benin)

Referred to by many as Africa's 'Great Wall of China', the Benin Moat was used as a defense by the historical Benin Empire from neighbouring empires like Oyo and Sokoto. It was considered the largest man-made structure lengthwise and was hailed as the largest earthwork in the world.

According to Fred Pearce of the New Scientist, “they extend for some 16,000 kilometres in all, in a mosaic of more than 500 interconnected settlement boundaries. They cover 6,500 square kilometres and were all dug by the Edo people. In all, they are four times longer than the Great Wall of China, and consumed a hundred times more material than the Great Pyramid of Cheops. They took an estimated 150 million hours of digging to construct, and are perhaps the largest single archaeological phenomenon on the planet.

Excavations by British archaeologist Graham Connah in 1960 uncovered a rural network of earthen walls that, he estimated, if spread out over five dry seasons, would have required a workforce of 1,000 labourers working ten hours a day, for seven days a week to construct – a rough total of 150 million man hours. 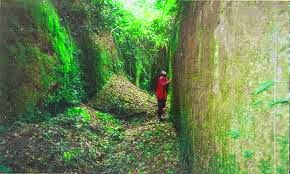 The invasion and subsequent annexation of the Benin Empire by the British led to the destruction of long stretches of the wall. As a result of this and poor maintenance by locals, the Benin Moat today lies fallow and largely forgotten, a pale reflection of its former self. 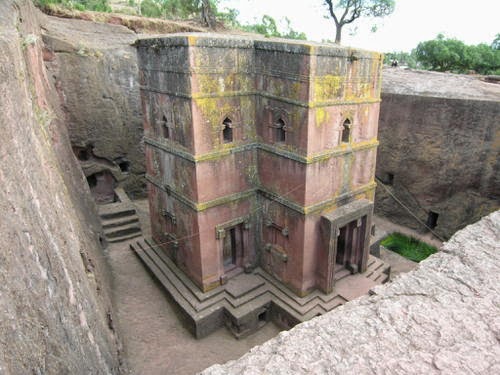 In a mountainous region in the heart of Ethiopia, some 645 km from Addis Ababa, eleven medieval monolithic churches were carved out of rock. Their building is attributed to King Lalibela who set out to construct in the 12th century a ‘New Jerusalem’, after Muslim conquests halted Christian pilgrimages to the holy Land.

The churches were not constructed in a traditional way but rather were hewn from the living rock of monolithic blocks. These blocks were further chiselled out, forming doors, windows, columns, various floors, roofs etc. This gigantic work was further completed with an extensive system of drainage ditches, trenches and ceremonial passages, some with openings to hermit caves and catacombs.

The churches are also a significant engineering feat, given that they are all associated with water (which fills the wells next to many of the churches) exploiting an artesian geological system that brings the water up to the top of the mountain ridge on which the city rests. 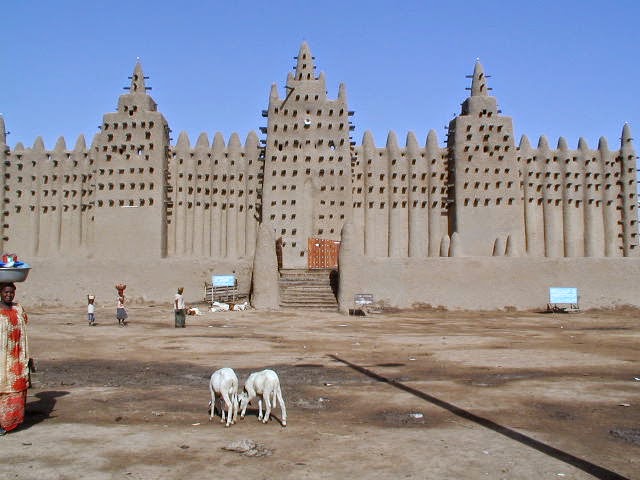 The actual date of the of construction of the mosque is unknown but the Great Mosque of Djenne is acclaimed by many as one of Africa's greatest architectural accomplishments. The first mosque on the site was built in the 13th century, but the current structure dates from 1907.

The earliest document mentioning the mosque is al-Sadi's Tarikh al-Sudan which gives the early history, presumably from the oral tradition as it existed in the mid seventeenth century. The tarikh states that a Sultan Kunburu became a Muslim and had his palace pulled down and the site turned into a mosque. He built another palace for himself near the mosque on the east side.His immediate successor built the towers of the mosque while the following Sultan built the surrounding wall.

The walls of the Great Mosque are made of sun-baked earth bricks (called ferey), and sand and earth based mortar, and are coated with a plaster which gives the building its smooth, sculpted look. The walls of the building are decorated with bundles of rodier palm sticks, called toron, that project about 60 cm (2 ft) from the surface. The toron also serve as ready made scaffolding for the annual repairs. Ceramic half-pipes also extend from the roofline and direct rain water from the roof away from the walls 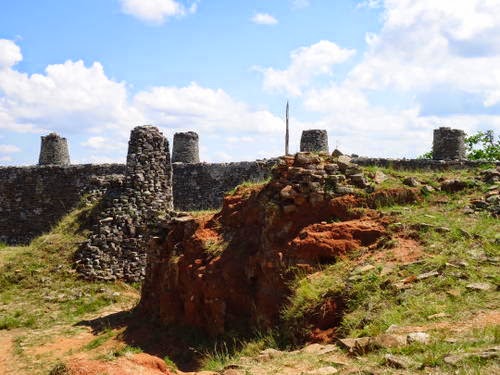 Some have claimed that Great Zimbabwe is the largest medieval city in sub-Saharan Africa. Great Zimbabwe was constructed and expanded for more than 300 years in a local style that eschewed rectilinearity for flowing curves. Neither the first nor the last of some 300 similar complexes located on the Zimbabwean plateau, Great Zimbabwe is set apart by the terrific scale of its structure. Its most formidable edifice, commonly referred to as the Great Enclosure, has dressed stone walls as high as 36 feet (11 m) extending approximately 820 feet (250 m), making it the largest ancient structure south of the Sahara Desert. Houses within the enclosure were circular and constructed of wattle and daub, with conical thatched roofs. 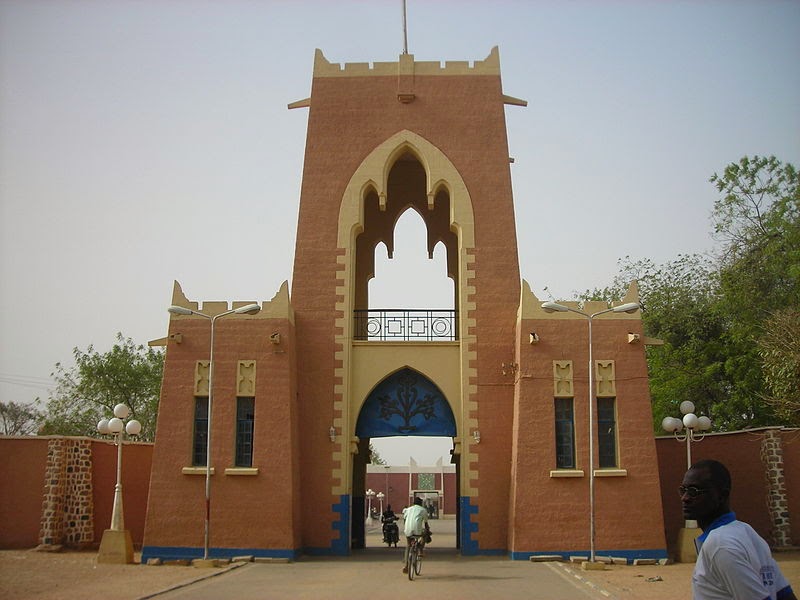 The Gidan Rumfa is the palace of the Emir of Kano, located in Kano, Kano State, Nigeria, and was built by Mohammed Rumfa, who reigned from 1463 to 1499. The entire palace is embraced by a wall 20 to 30 feet high from the outside, the height of which never exceeds more than 15 feet from the inside.

Visitors at the turn of the twentieth century commented on the wall's durability, which was said to have been 15 feet thick in some places. It is tapered inward and surmounted by rounded crenellations. The exterior wall, similar to the exteriors of the buildings inside the complex, is modestly decorated with shallow arched grooves traced in the mud plaster. The eleven mile wall was once surrounded by a moat with a parapeted bridge to the main south gate.