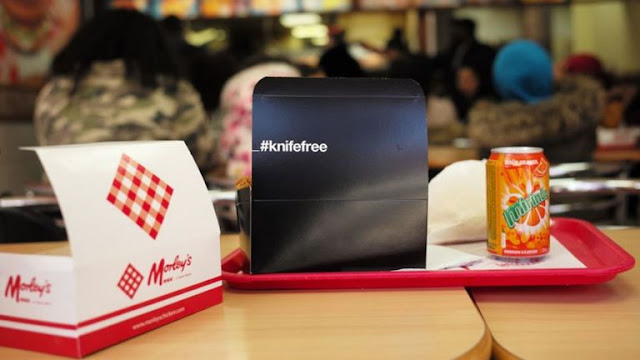 Despite various statements from experts and community leaders urging the government to invest in deprived communities and address the many longstanding issues that are known to lead people into criminality, the UK government's genius solution was to commission a campaign to share 'real life stories' of people affected by knife crime on chicken and chips boxes.

On the surface, this might seem like an honest attempt to share much needed information via a platform that the target audience is familiar with. However, when you look beyond the surface,  you will find that this was at best a lazy attempt to use a tired stereotype to address a serious problem. Or worse, a crystal clear sign that the UK government is out of touch and doesn't care about issues affecting minority communities.

We are rolling out our #KnifeFree chicken boxes in over 210 chicken shops in England and Wales, including Morley’s, Dixy Chicken and Chicken Cottage. They use real life stories to show people how they can go #KnifeFree. pic.twitter.com/vrG4WWa56v
— Home Office (@ukhomeoffice) August 14, 2019

This tone deaf campaign has been widely criticised. And rightly so. And please don't mistake this as an apology for a campaign that is a monument to ignorance but if we want to make sure this doesn't happen again, we have to unpick the entire episode and ask ourselves where the idea of using chicken and chips boxes could have come from.

There are obviously many factors that led to this point but since I first heard of the campaign, I haven't been able to shake the idea that it was based on the popular idea that all black people (ethnic minorities, in general) love chicken. Some people think this is a harmless statement. Some even think it's a statement of fact. However, I think it's an ignorant statement that is laced with all sorts of prejudiced undertones.

Growing up in Nigeria, the country with the most black people in the world, I never heard anyone mention anything about black people loving chicken. To be honest, in a country where you shared the same skin colour with more than 190 million people, 'being black' was of no real consequence. Beyond that, people were exposed to a wide variety of meat options and preferences were more likely to be associated with tribe and social class than phenotype. It wasn't until I relocated to the UK that I was told that black people basically had a genetic predisposition to chicken.

Not knowing better, I subscribed to this idea for some time and found myself choosing chicken ahead of other meats I had known and loved my whole life. This myth thankfully began to unravel when I found myself in situations where chicken wasn't available and I found myself loving the taste of whatever else I found myself eating.

I also found out that chicken was the cheapest meat on the market in the UK, which explains why it is so universally available and popular. Don't get me wrong, I don't mind a drumstick or thigh from time to time but that's often because nothing else is available.

It's also worth noting that the people that I personally know that LOVE chicken the most are all white. And they are not the white people that grew up on the estates either. These are people that grew up in comfortable suburban surroundings and will be found eating chicken nuggets at all hours and routinely devouring buckets of KFC. It's not a matter of what's available for these guys. It's a matter of true love.

I've heard so many people (and ethnic minorities, generally) voice their dissatisfaction with the #KnifeFree campaign. I am not trying to make excuses for the campaign but if we want to avoid a repeat, we need to stop peddling these stereotypes. They are never helpful and will always work to our disadvantage.

Stereotypes are a lazy way of getting to know people. It is a cut and paste approach that doesn't consider the intricacies and nuances of the person or people you are trying to know. Even worse, it invalidates the unique qualities that makes us all who we are. For these reasons alone, we should do our best to avoid stereotypes.

And if we all agree that stereotypes are not very useful for getting to know people, we can also agree that it's not a great idea to stereotype yourself. It may seem like an innocent thing to do in the moment but stereotyping yourself is a chicken that will always comes home to roost.