By now you’ve probably read multiple news stories about the massacre in Vegas on Sunday night/Monday morning. A ‘lone gunman’ opened fire on revellers at a music festival, killing 59 (at the last count) and injuring more than 500 before turning the gun on himself.

The reluctance to call this massacre an act of terrorism is perhaps the most widely discussed issue. Many have voiced disgust at the benefit of the doubt that seems to be abundant for white perpetrators of mass violence compared to the readiness to label similar acts carried out by other races as terrorism. "Local individual", "licensed pilot and hunting enthusiasts with no criminal record" and "accountant that played $100-a-hand poker" are some of the headlines. Anything but "terrorist". And you all know why.

Nevada state law is clear on its definition of terrorism - "Any act that involves the use of violence intended to cause great bodily harm or death to the general population." But clearly that isn’t clear enough for some. You must either be religious or overly political and not white for your act of mass violence to get that ‘terrorist’ tag. 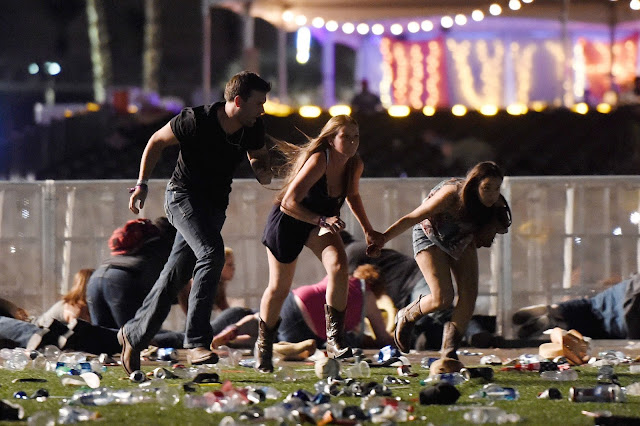 There is also the topic of gun control, but I don’t even think it is necessary to spend too much time on this given the current political situation. President Trump is in the NRA’s back pocket and didn't even mention the issue of guns and gun control in his speech. Even if something miraculous happens, the fact that gun sales usually increases after these sort of incidents (out of fear of a change in the law and fear of similar incidents) means there will be next to no change in the availability of guns. There’s also the possibility of a black market, which will probably be worse than the current situation.

Also, if the Sandy Hook massacre, which killed 20 6-7 year old kids couldn’t force a change in US gun laws, this massacre certainly won’t. Americans seem to be ready to let everything crash and burn before they even consider a change.

Perhaps the biggest reason why I don't think anything is going to change is because too many of us are ready to normalise people like Stephen Paddock and their actions. We are quick to apologise for their madness and try to explain it all away. To many of us, regardless of our desire for greater gun control or our dissatisfaction with media coverage of these events, are not disappointed by these events. Too many of us will say 'we don't know his motive so we can't be sure that he's a terrorist', like whether he killed because of religion or any other issue makes a difference to the fact that his acts were violent and dangerous to human life and intended to intimidate a civilian population.

There is so much that can be said about the Vegas machine gun massacre and the reactions (and non-reactions) it has sparked. We will, of course, show remorse and wonder why this always happens but soon we will move on and the necessary steps needed to avert future reoccurrence will not be taken. Unfortunately, many will forget about this incident and will not remember that things needs to change until it happens again.
at October 03, 2017