The myth of modern day tolerance

Tolerance is one of the most highly regarded of modern day virtues. It is widely commended, and its value rarely disputed but a closer look shows that what most people understand to be tolerance is as far from it as possible.

Tolerance is increasingly becoming the preserve of the liberals. The common rhetoric is more and more one that equates a liberal disposition to progressive thinking, and equates being conservative to bigotry. Whether it is on issues of religion, social welfare or whatever it might be, a strongly held view will almost automatically be viewed by many as regressive and deluded.

The dictionary defines tolerance as a fair, objective, and permissive attitude towards opinions and practices that differ from one's own. And if this is true, tolerance surely has to be a two-way street. It is not for one side to purpose to shut down the other because their views are at odds, or to persecute for holding 'uncomfortable' values. 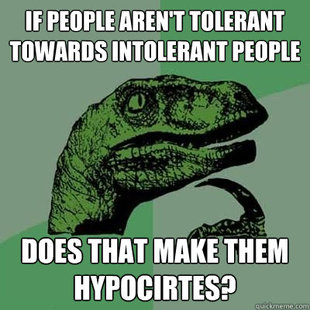 The fact remains that every single human being has something that irks them. We have all heard and witnessed things that rub us the wrong way and perhaps push us to the edge of reason. These dispositions, often formed as a result of life's experiences and learnings, are what make us who we are and what makes us a glorious human race.

I believe there is right and wrong, and very few grey areas. I believe everyone has the right to hold whatever opinion or belief that suits them but no one has the right to enforce their views on anyone, unless that person is under their authority. I also believe in the right to disagree gracefully and to air an opinion freely, as long as it doesn't encourage hate or prejudice.

Unfortunately, the brand of tolerance that is preached by most mainstream media does not agree with mine. It is a form of tolerance that aims to drown other opinions and to take the voice away from anything apart from its own. This form of 'tolerance' is not tolerance at all. It is just another masqueraded form of close-mindedness.

Despite all that's been said, I don't think I am naïve enough to think people will just be polite to each other and courteous about everything everyone has to say. We are naturally self-seeking and tunnel-visioned, and it will take a conscious effort to act otherwise to see a change. I just want an end this misunderstanding of tolerance. Tolerance for only those who agree with you is no tolerance at all.