Messi is the greatest footballer of all time 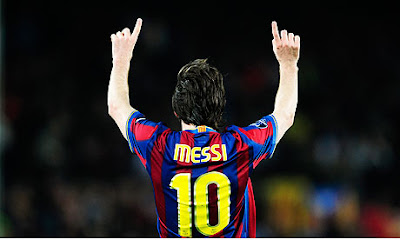 For the last few years, Lionel Messi has been the best footballer around. Week in week out, he has wowed football fans around the world with his talent, desire and remarkable attitude, and has broken almost every goalscoring record in the book in the process. But for some reason, some people still question his right to the title of 'Greatest of all time'.

Messi is often compared with his Argentine compatriot, Diego Maradona and Brazilian,Pele who were spoken of in similar superlatives in their day. Pele and Maradona didn't only perform at the highest level with their clubs, they also led their countries to World Cup glory. And in Maradona's case, basically doing it on his own. The argument often put forward is that until Messi wins the World Cup like Pele and Maradona, he can only be referred to as one of the greatest but not the greatest.

But this theory has too many flaws. Pele, for example, was an incredible goalscorer and all round entertainer but in terms of overall contribution to the team, there isn't much worth talking about. And even in terms of goalscoring, Pele's biggest claim to fame, Messi recently surpassed Pele's incredible record of 75 goals in one season and has gone on to beat Gerd Muller's tally of 85 in a calendar year.

When compared with Maradona, Messi's stats are off the scale. Messi has already scored more goal than Maradona did in his entire career and apart from a World Cup triumph, has eclipsed his countryman in terms of honours. Messi has three Champions League medals to his name, 5 La Liga titles, two Copa del Reys and even an Olympic Gold Medal in football from the 2008 Olympics. Maradona did win the World Cup but only has one La Liga title, one Copa del Rey, two Serie A titles, one Coppa Italia and one UEFA cup. Maradona never won The European Cup, which was the previous incarnation of The Champions League.

Messi has also been raised in Barcelona's academy to value his team mates, something he has repeatedly shown in public - especially when he is being awarded with personal accolades. His legacy when his career is over will not just be of his ability on the pitch but about his personality off the pitch and how he valued everyone else around him as much as he valued himself. That is what greatness is all about.

Whether or not Messi goes on to win the World Cup, I don't think that should have any bearing on his claim to the title of the greatest footballer in history. He has delivered on a level beyond what anyone has ever seen or imagined. And when you consider that he is doing this in an age when footballers are fitter and healthier than ever and teams are more tactically aware, it only fills you with even more wonder. All hail Lionel Messi – The Greatest of all Time

Perhaps the only realistic question left to as is whether he could do the same thing he has been doing in Spain on a rainy Tuesday in Stoke.
at December 10, 2012