Hunting for new music - Thoughts on an evening at Underbelly, Hoxton

London is awash with exciting new musical talent. Along with the natives, acts from all over the country and the rest of the world are packing out small venues in every corner of the city on every night of the week to present their musical offerings. Some of them, for the fun of it and others with bigger dreams of perhaps getting signed to a record label, and packing out even bigger venues.


Regardless of genre, England's capital has a long history of greats gigs with great acts.From the days of Jimi Hendrix to more recent success stories like Adele and Ed Sheeran, London has always been a good place to start off on the road to musical world domination and many new artists today are hoping to be part of that history.

As a result of this success, London is also awash with a few too many gigs. The task is never to find a gig to go to but about finding a good one – onethat has a line-up worth paying to watch and is not ridiculously expensive to get into. Of course we can refer to websites like Gigwise and eGigs for guidance, but for any true lover of live music, I believe the challenge is always to discover a new act on your own and to make your own judgement on their offering without any previous context created through someone else's opinion.


This week, I wasinvited by my friend, Midé to a gig he was headlining at The Underbelly in Hoxton. Myself and Midé go back a long way and I have always been a fan of his music. I believe his mixture of acoustic soul and clever songwriting, influenced by a history of writing poetry, offers something completely different to any offerings we currently have on the market and it is only a matter of time before his music takes off to bigger things. He was performing some of his old material, and some new songs from his upcoming album. Safe to say I was more than impressed with what he brought to the table and more excited about how things will progress for him from here. 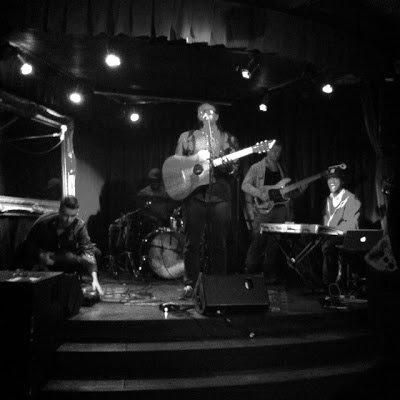 But before Midé got onthe stage, we were treated to music from some other acts. Andeventhough every single act that got on stage was amazing and madethe £5 entry fee feel like I was massively undercharged, two actsreally caught my eye and gave me even more reasons to be excited.Somerset-born Ali Warren and his band performed a rousing set ofsongs that had a unique blend of Folk, Blues, Jazz and Rock. Theband's high energy performance was only topped by Ali's sense ofhumour and stage presence. His chemistry with the band was alsoexcellent. The set only lasted half an hour but I thoroughly enjoyedmyself and have since added Ali Warren to my list of acts to watch.

Also on the bill wasLewis Tuff, a Bristol-born singer-songwriter who performed a set ofsongs that fused his rich vocals with a rhythmic acoustic sound. TheJohn Mayer influences were obvious but also was musicality and hisability to take ownership of a song, as seen on his rendition of TheFray's 'How to Save a Life'. I am sure this won't be the last time Ihear from him.


All in all, the nightwas fantastic. I jumped on the train home with a spring in my step,headphones plugged in and definitely humming along to the music I waslistening to. I certainly would not recommend humming to music whilston the train alone but if you don't already, I'd highly recommendthat you find a gig somewhere near you whenever you can and take in aglimpse of the musical future. If not for anything else, so that whenit all begins to come together, you can say 'I knew them before theywere famous'. Trust me, it's a good feeling.